EAAA exists to make real and meaningful change. We do this primarily through advocacy, publicity and practical guidance.

EAAA exists to make real and meaningful change. We do this primarily through advocacy, publicity and practical guidance. 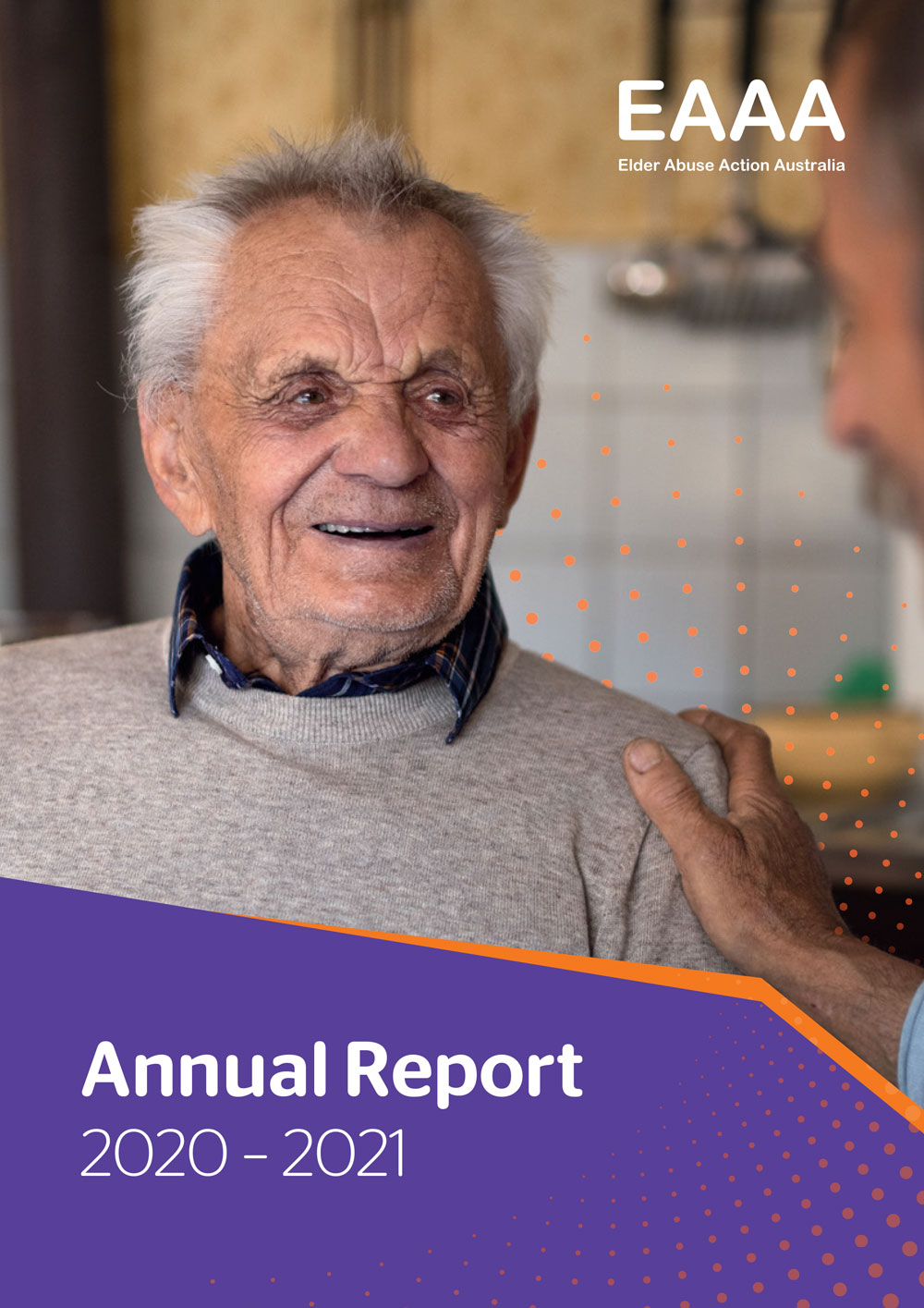 EAAA was established to confront the often-hidden problem of discrimination, neglect and mistreatment of older Australians. 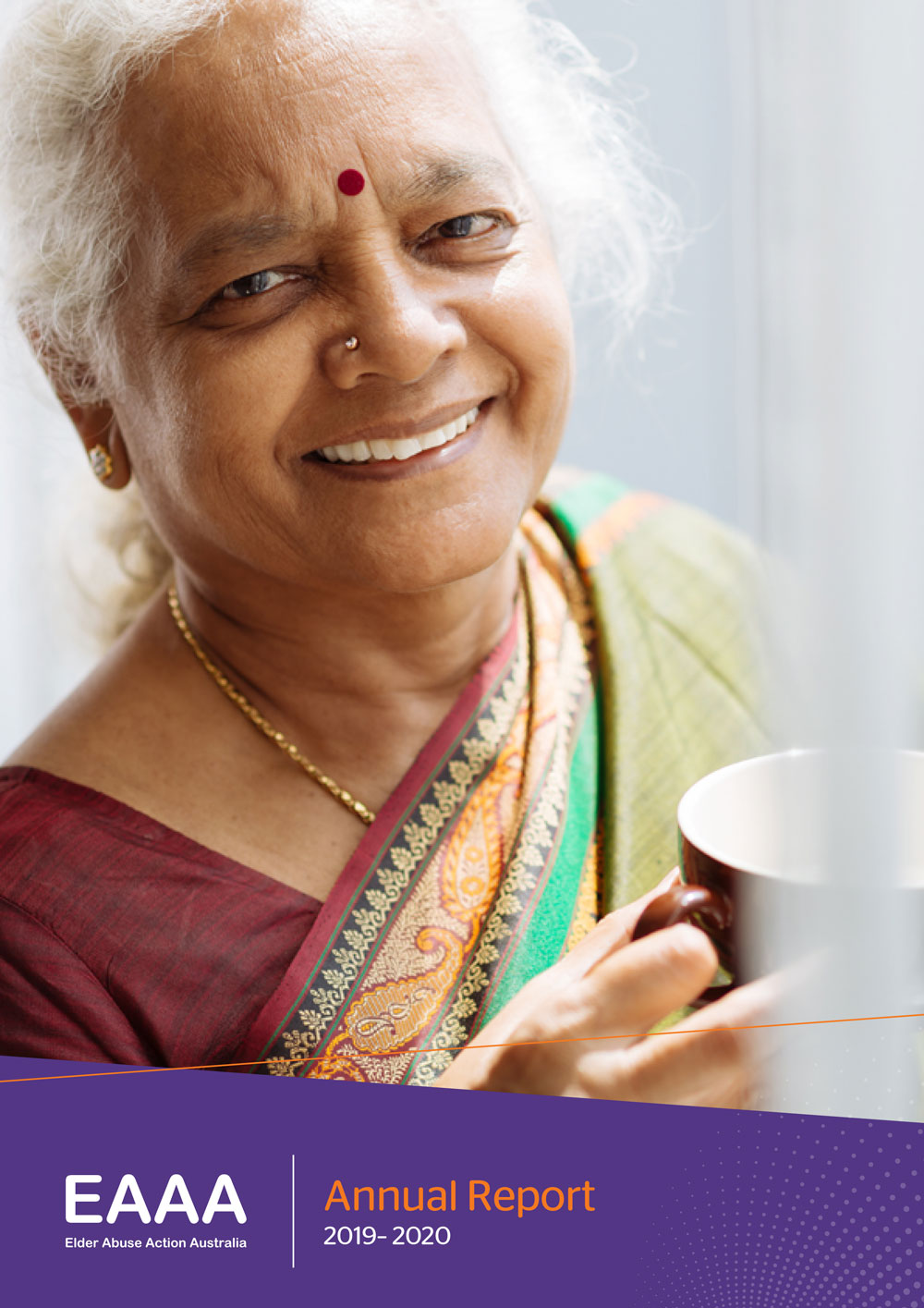 Elder Abuse Action Australia (EAAA) is the national voice for action to eliminate elder abuse through systemic advocacy and policy development, best practice and research, and education and capacity building. EAAA is a specialist organisation with knowledge of issues that impact older people and their families, communities and broader society. Our board represents advocacy groups that are strong advocates on elder abuse in their jurisdictions. 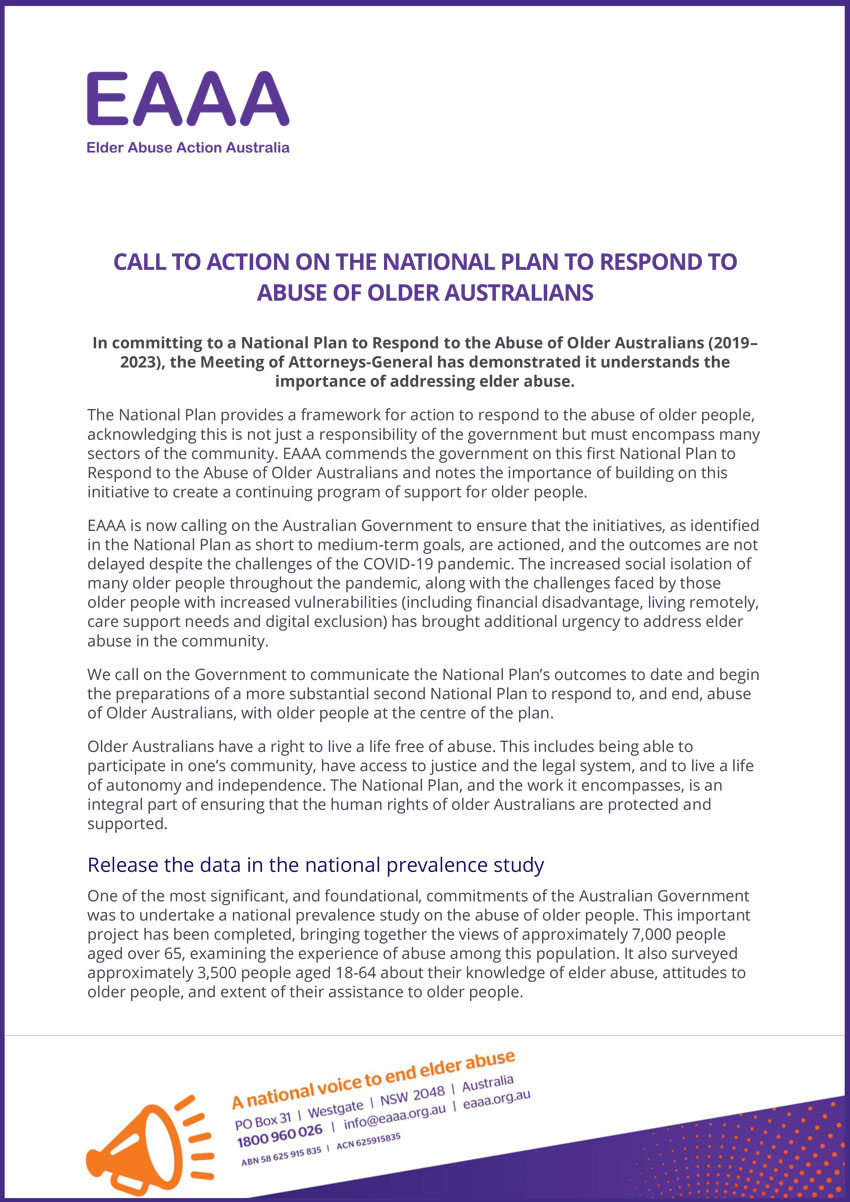 In committing to a National Plan to Respond to the Abuse of Older Australians (2019–2023), the Meeting of Attorneys-General has demonstrated it understands the importance of addressing elder abuse. 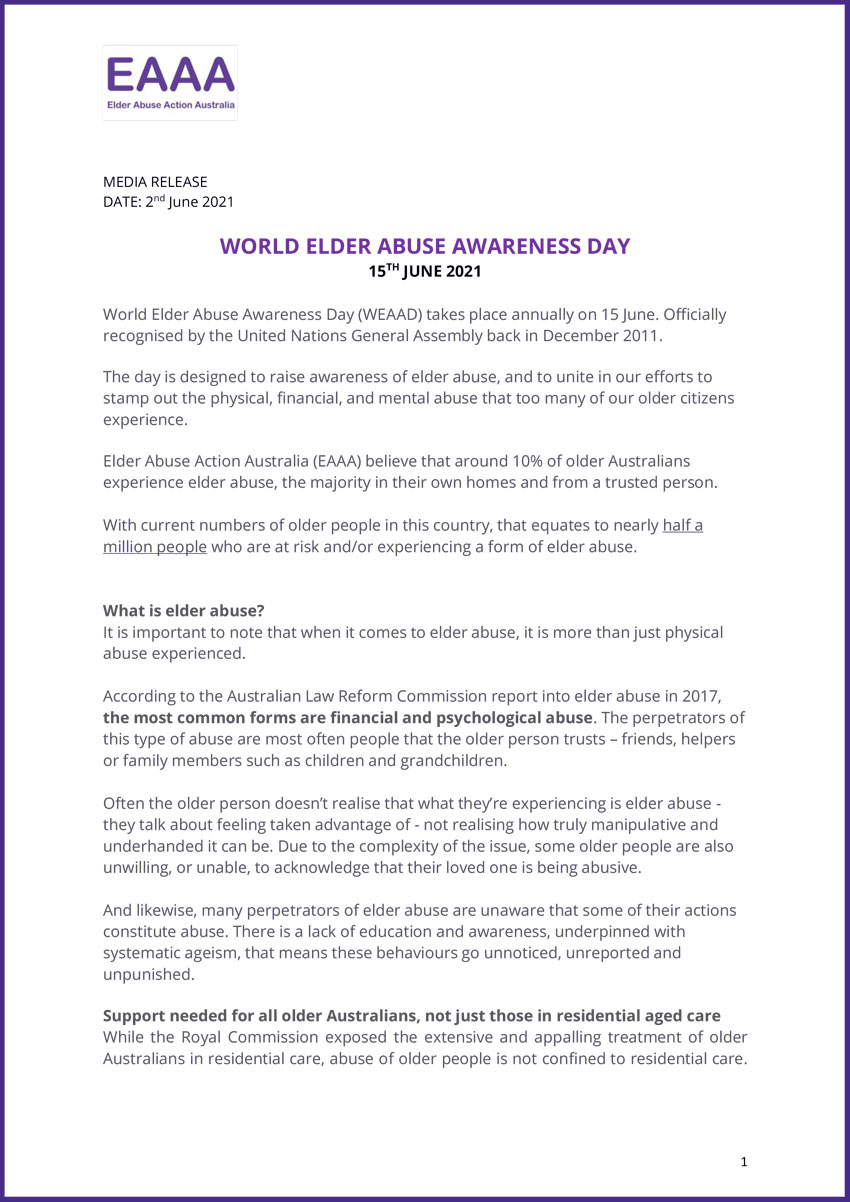 The day is designed to raise awareness of elder abuse, and to unite in our efforts to stamp out the physical, financial, and mental abuse that too many of our older citizens experience.

Elder Abuse Action Australia (EAAA) believe that around 10% of older Australians experience elder abuse, the majority in their own homes and from a trusted person.

With current numbers of older people in this country, that equates to nearly half a million people who are at risk and/or experiencing a form of elder abuse. 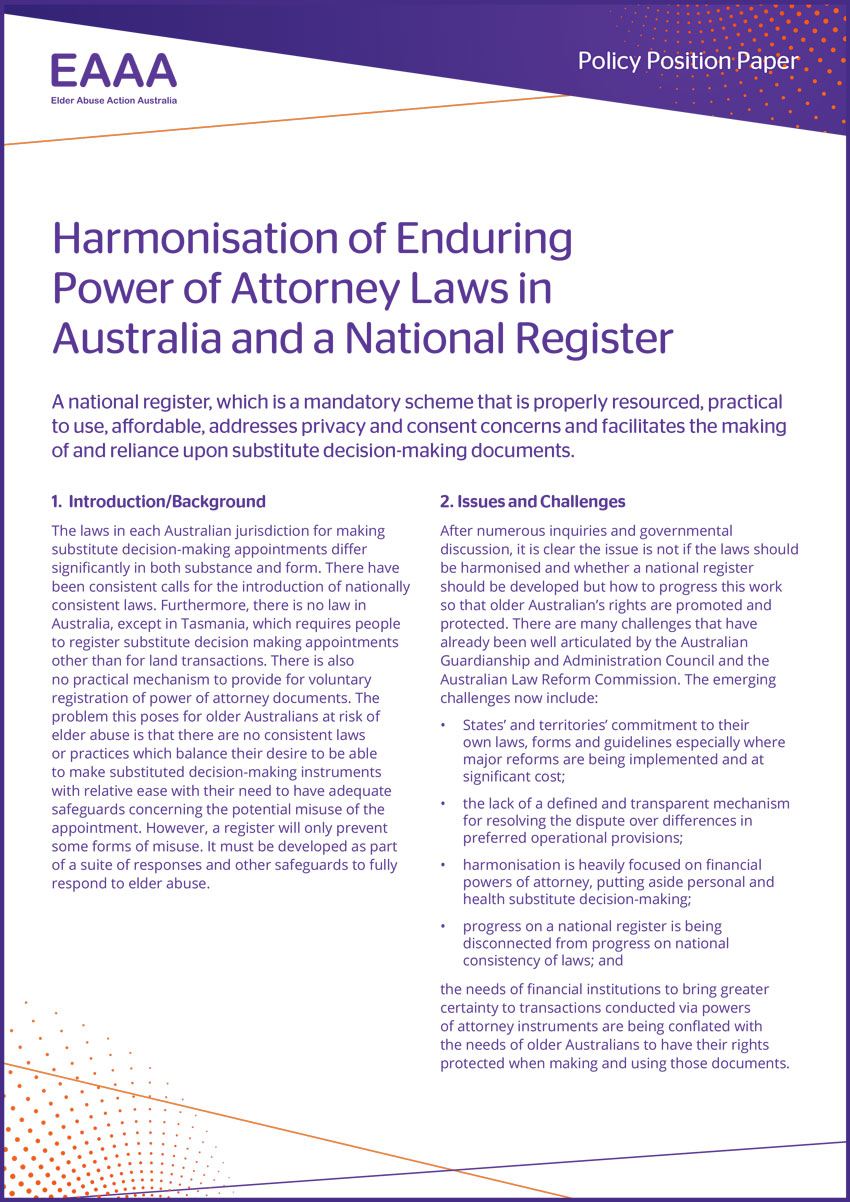 A national register, which is a mandatory scheme that is properly resourced, practical to use, affordable, addresses privacy and consent concerns and facilitates the making of and reliance upon substitute decision-making documents. 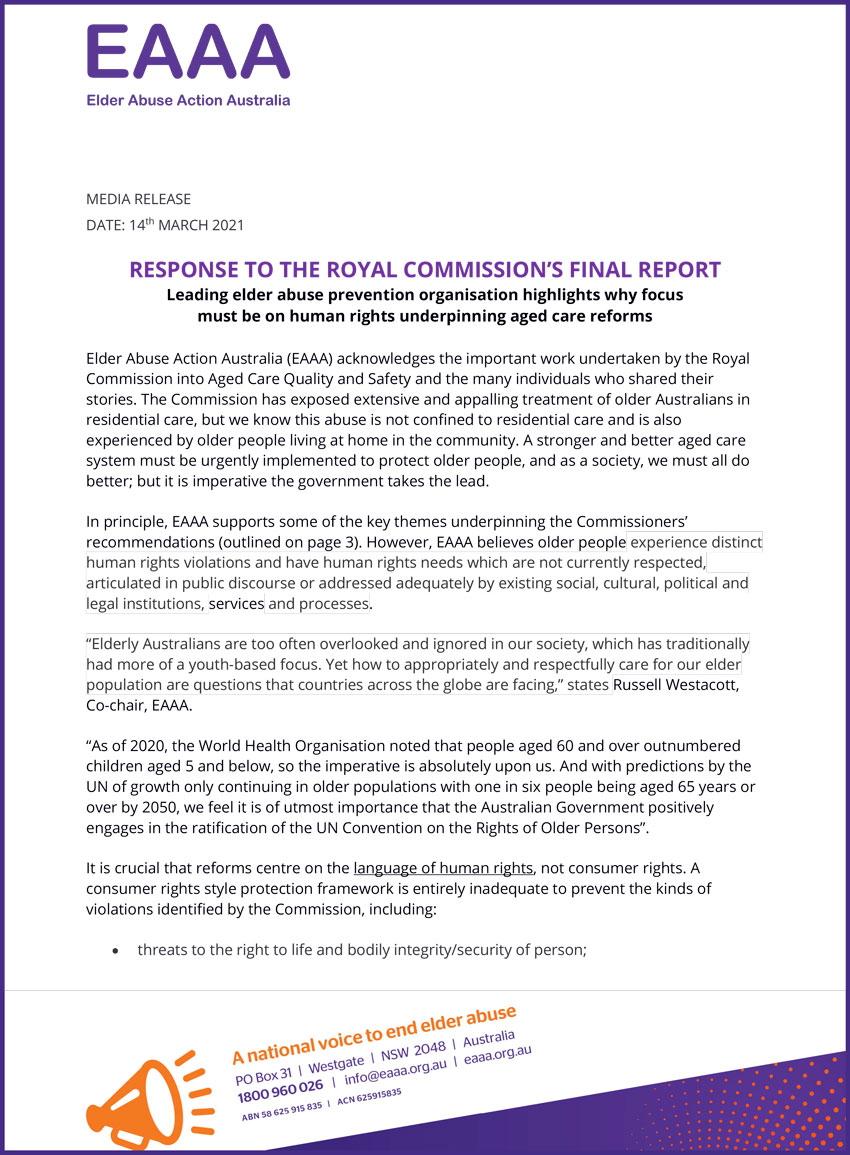 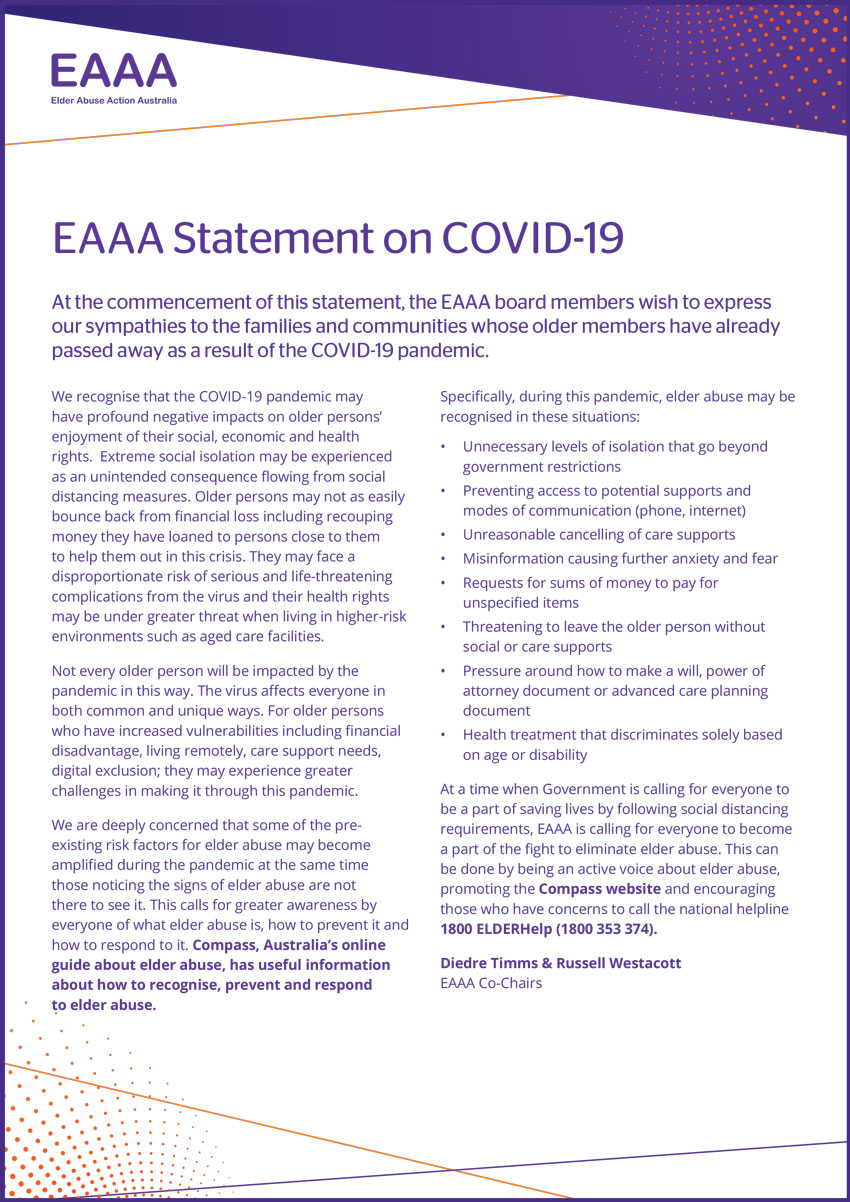 At the commencement of this statement, the EAAA board members wish to express our sympathies to the families and communities whose older members have already passed away as a result of the COVID-19 pandemic.

EAAA is funded by

Subscribe to National Voice - The official newsletter of EAAA.